❖ Sluckus from the Upper Islands ❖ with June Burn.

Then, later in the day these below photographs were taken c. 1:30 p.m. as the Orcas were traveling northeast from Lopez ferry landing to Peavine Pass.
Courtesy of L.A. Douglas, shooting from his deck on Blakely Island, SJC. 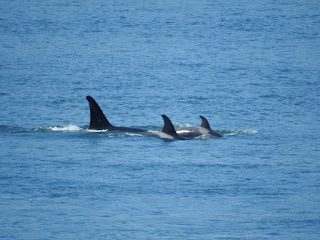 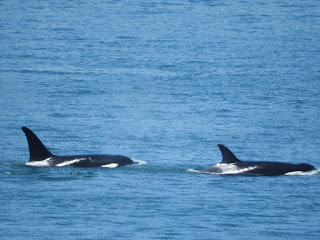 
Lew and his wife, Tib, longtime Orcas Islanders, purchased Yellow Island and retired there fulltime in 1947. Lew wrote long, interesting letters to friends and family while he was snugged down and happy building a life on their private island. Written in longhand by Lew to some correspondents from the mainland, here is an excerpt from one letter dated, 30 December 1954.

"...Several years ago I went all around Vancouver Island on Ed Kennell's pilot schooner GRACIE S.*  We went into places that still are raw, undeveloped, wild, and about as they were many years ago. It is a wild region that West Coast, and it is anyone's guess of what will ever be made of it. One place we went into was Refuge Cove north of Nootka Island and west a bit. On the west side of the cove was quite a large Native village, canoes and skiffs hauled up in a long row. The men had rigged clothes lines running from the shanty-like homes to the tops of the tall fir trees and these lines resembled the masts of vessels dressed with code flags as on a special occasion. Every color of the rainbow in shirts, pants, dresses, underwear, ribbons, and whatever else those Natives used. On the opposite side of the nearby land-locked cove was a fish camp run by an Englishman who had seven children, who when lined up on deck, looked like animated treble musical scales and sounded like it also.
This Englishman told us that the old Natives had said to him that our schooner was the largest vessel which had ever come this far into the cove and the only sailing vessel of such a size, in many, many years which had been at this place.
On our second day, there were two very, very old Native men who came alongside in their canoe which they tied to our rail and then made signs they wished to come aboard. Once on deck, they moved slowly around inspecting everything very closely and missing nothing. Their English was extremely limited but their gestures were emphatic. All they kept saying to each other was; "beeeg sheep, beeeg sheep" and "Seelah! Seelah!" and nodding to each other in agreement. They believed we were an old-time sealing schooner and wanted to know "where come--Seattle?" Ugh--Seelah"; "Come Seattle many long time ago!; "Here!"
So, you see there are still Natives along that west coast of Vancouver Island who remember the pelagic sealing days.
When we finally got down to Victoria, among the visitors who came aboard was a very tall, lean, sharp-faced, man with piercing gray eyes and a general bearing of one who had known at first hand the sea. I was introduced to him and he turned out to be a Captain Todd, one of the last skippers of a pelagic sealing schooner sailing out of Victoria shooting seals along the coasts of Japan before the International agreement was established outlawing this wholesale slaughter of the fur seal.
On Orcas, when we first came there, lived a Captain Gale whose schooner, also a sealer, had been seized by the U.S. government. Just before his death, I think around 1934, the government reimbursed him for his loss. This came at a time too late to do him much good but his sister, Mrs. Madeline Curry, at about age 92 is still able to supply her few needs from what remains of the money refunded to Capt. Gale.
So it can be seen we're not so very far removed in time from some of what happened when this Pacific Northwest was yet younger than we now know it. I shall never forget that evening spent listening intently to the first-hand accounts of the sealing days of Captain Todd of Victoria, B.C."
Lew Dodd.
With thanks to Ruthie for sharing the letter copies written by this retired man of the sea.
* More about the pilot schooner GRACIE S can be seen on this Log HERE

Another post of the arrival of Tib and Lew Dodd to Yellow Island in 1947 can be viewed HERE.
Posted by Saltwater People Historical Society at Tuesday, June 16, 2020 No comments:

Most races are canceled for 2020 but we can pull from the historical archives and admire the old duffers huffing past to give their audience a thrill, then and now. Here is a report from 1951.

"The competition was so hot in the annual Maritime Day races on Elliott Bay, Seattle, that two tugs broke down in the four-mile sprints.
Seattle boats won three of the races. A Navy tug from Alaska took the other.
Thousands of persons onshore, on the Coast Guard cutter WACHUSETT, and on dozens of small boats watched the tugs plunge through the water in quest of the plaques awarded the winners.
It was breezy and sunny, and the hard-working committees of the Puget Sound Maritime Historical Society and the Propeller Club, sponsors of the races couldn't have asked for better weather. [Web Anderson was the chairman of the event.]
The Seattle tug ISKUM, owned by the Pioneer Towing Co and skippered by Don Houchen, took the honors in the first race when she beat out seven competitors in Class C, the race for busy little workboats of less than 273 horse-power.
Second place was won by the BEE, another Seattle boat, owned by the Washington Tug & Barge Co, with Otto Johnson as skipper. Third place was taken by the MAGNOLIA of Tacoma, owned by the Olson Tug Boat Co and handled by Bill Thompson.
After the starter came the closest race of the day, with three tugs in Class B, for harbor tugs, finishing within ten seconds.

The Foss Launch & Tug Co which had bad luck when the HAZEL FOSS developed engine trouble in the opening race, took first place in Class B. The FOSS No. 18 was the winner, followed closely by the LaBONNE, Vancouver, B.C., and the SWIFTSURE 11, from New Westminster, B.C.
Another Foss tug, the WEDELL FOSS, followed this with a victory in Class A, for the powerful ocean-going craft. In second place was the MACLAUFAY from Tacoma, and third was the ISLAND SOVEREIGN, from Victoria, B.C.
Honors in the military class, which topped the program, went to the ATA-242, a Military Sea Transportation Service tug from Kodiak, Alaska."
Jay Wells, Seattle Times, May 20 1951.