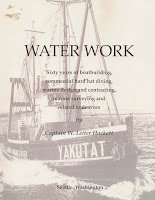 Posted by Saltwater People Historical Society at Thursday, December 15, 2011 No comments: Links to this post

" The first steamer in North Pacific coast waters rounded the Horn and came chugging into Puget Sound in December 1836 [175 years ago]. She was a sturdy, stubby, little craft named the BEAVER, only 101-feet with a beam of 20-feet and of only 100-tonnage.
She was built on the Thames and from the day when her keel was laid until she was launched and set out for her remote destination she was an object of keen interest and speculation. When she was launched King William IV, and 150,000 persons of all classes were present and it was a gala event indeed. Almost nothing was known of steam navigation at that period and still less of the faraway coast of the North Pacific. It seemed an heroic and almost daredevil venture for so small a craft to set out for an almost unknown land on the other side of the world.
She was, of course, a wood burner and, as sufficient fuel could not be carried for the voyage, her side wheels were not attached and she was fitted with sails and rigged as a brig under the command of one Captain Horne. The bark COLUMBIA sailed as a consort, but the BEAVER out-stripped her by nearly a month and arrived at the mouth of the Columbia, via the Hawaiian Islands 10-days from London.
Her arrival at Fort Vancouver was announced with a broadside from her batteries, which raised echoes from the surrounding forest and brought everyone at the fort rushing to the waterside. Carpenters set to work putting her side wheels into place and soon her paddles were resounding down the river on a trial run.
Almost at once the BEAVER went into the service of the Hudson's Bay Company, which then controlled virtually all of the Pacific Northwest country. She left outward bound, never to re-enter the Columbia. For years she ran up the coast as far as Sitka and in and out of virtually every bay, river, and inlet between Sitka and Fort Nisaqually. Men were kept busy chopping wood for fuel.
Her paddle wheels were small and set far forward. She carried a crew of 30 men (one wonders how they found quarters in such a little craft), had an armament of four six-pounders, and was liberally supplied with small arms. Her decks were protected by boarding nettings to prevent access by the natives except by the gang planks. More than 30 natives were never allowed on board at one time unless they were accompanied by their wives and children as an evidence of their peaceful intentions.
After paying for herself several times over, she was considered too small and too slow for the company's increasing business, so the OTTER, a propeller craft, was brought out in 1851; the BEAVER was used as a supplemental vessel, cruising up and down the coast, carrying men and supplies to the various posts and collecting gold and furs.
In 1852 she was seized on a charge of violating United States revenue laws. When the watchman was ashore the BEAVER got up steam and made haste to get out of American waters. The trouble ended there. During the Indian War both the BEAVER and the OTTER were placed at the disposal of the American authorities.
When the Hudson's  Bay Company's charter expired the BEAVER passed into the hands of the Imperial Hydrographic Office and for years was in that service, exploring coasts and sounding harbors. With the coming of more modern craft, she degenerated into a tramp, doing odd jobs up and down the coast.
In 1874 she was refitted as a tugboat and sold to a private firm. She served as a tug for 14 years and then was given a license as a passenger boat and went into service on Burrard Inlet. Finally, after 53-years of faithful and valiant service, she went on the rocks at the entrance to Vancouver Harbour in a fog and there she lay for years, with rags of rigging swaying mute appeal for help. At long last in a storm the sturdy old BEAVER broke up and so ended her days. Her boiler is preserved in the Washington State Historical Museum in Tacoma".
Just Cogitating column
Text by C. T. Conover (1863-1961)
The Seattle Times, 29 March 1951
Posted by Saltwater People Historical Society at Sunday, December 11, 2011 2 comments: Links to this post