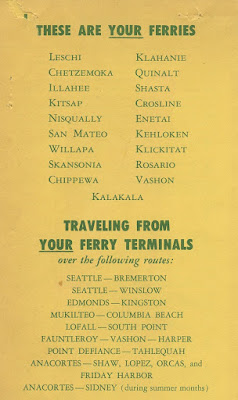 The ferry Klickitat, one of the 19 ferries that became the property of WA State 1 June 1951, is again on the Anacortes-San Juan Islands run, after a thorough renovation and overhaul.
According to information, the renovation of the "Klick" marks the first step in an overall program of improvement in the ferry fleet.
Most evident changes to ferry patrons are threefold; first, both exterior and interior is freshly painted from stem to stern in green and white, symbolic colors of WA State and the Evergreen Route; second, lines of the ship have been streamlined with the removal of vertical windows on the auto deck and installation of open portholes, with widely spaced bars, giving the ship as a whole a far more modern appearance; third, passenger cabins have an entirely new appearance with comfortable spring chairs replacing the old benches, and green linoleum replaces the old flooring.
Other improvements include replacement of woodwork that had suffered the ravages of salt water, new canvas and Irish felt on the passenger deck and a complete overhaul of the 1,800 HP diesel engine.

Popular with tourists, the Klickitat offers connecting service between the mainland and Orcas, Shaw, Lopez, and the San Juan Islands, and during the spring and summer seasons, to Sidney, BC on Vancouver Island.
The Klickitat was built in 1927 and first served the Golden Gate area in San Francisco. When put into service on Puget Sound, she was given the popular Indian name Klickitat, meaning "beyond"––the name of an old Northwest Indian tribe living beyond the Cascade Mountains from the coast. The Klickitat Indians, now merged with twelve other tribes, today live on the Yakima Indian Reservation.
The capacity of the Klick is 400 passengers and 80 automobiles. Pilots of the ship are Captain John Oldow and Captain O. Van Nieuwenhuis.
It is said more than 250 gallons of paint were required for complete coverage of the Klickitat. Above text from the Friday Harbor Journal. 1951.
1994: In a WA. State Department of Transportation brochure the Klickitat is listed with a capacity for 75 cars and 616 passengers. Her gross tonnage then was 1,369/931.
2007: Retired.
2009: Cut up for scrap in Mexico.