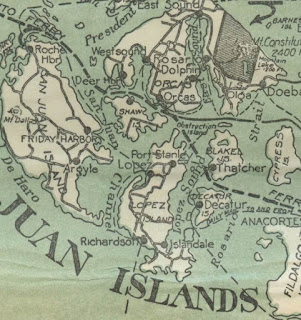 Metzger Map of 1930
The same year as the below
June Burn column, verbatim.

"There are three villages on Lopez: Port Stanley, Lopez, and Richardson. Mr. Kilpatrick owns the store at the village at the north end. Bell-Middleton, of Friday Harbor, has lately taken over the one at Lopez, I hear. And Mr. Lundy is storekeeper at Richardson, I believe.
Port Stanley, on Swift's Bay, looks out across the waters of Peavine Pass, across Orcas to Mount Constitution on the north and out to Blakely Island on the east.
Lopez is beautifully located on a fine little harbor called Fisherman's Bay, although it is not named on my map. A peninsula joined to the main island by a slender, sandy spit makes this a fine harbor for fishing boats. One swings there now, white and graceful, waiting for her master to come aboard and go off northward to Alaska. A pretty home adorns the grassy tip of the peninsula.
Above Fisherman's Bay, Miss Micklejohn's attractive resort, Bracken Brae, with its neat little brown cottages perched on a hillside, from which there must be a fine view over San Juan Island to the waters and islands beyond.
Below Lopez, the goat farm about which I have heard so much. Here they make cheese from goat's milk. I wanted to stop and watch them make some, but my conductor was in a hurry.
Richardson stands on high rock bluffs on the southwestern side of the island. Here the boat from Seattle stops before it must navigate that swift, whirlpoolie, tide-ripped thread of water between San Juan and Lopez Islands. When the tide is running strong even the larger boats get tossed about and the small ones find the going very difficult. Eight knots is no unusual performance for some of those tides.
The outlook from Richardson, is very broad, swinging from the north to southeast with water and green land everywhere.
I am lost. That is, I haven't the least idea whether we turned north, east, south, or west from Richardson to reach the old Davis place, about which I wrote months ago. But at any rate, we get there. And a beautiful farm it is with a Davis still living there. The house is big enough to accommodate two or three families of modern size. It faces a long sloping stretch of fertile fields. Back of it rises the high rim of the island, below which is Davis Bay.
On the old John Wilson farm, there is a blacksmith shop still in use. A pair of beautifully matched gray horses standing in the field on the Eddie Buchanan place. Lovely unpainted houses occasionally. Paint makes things last longer and painted houses look more thrifty, of course. But how much more attractive the unpainted ones to my eyes! The color of the earth.
One sparsely settled cemetery on the island with a very beautiful church beside it. Tall, lean spire, pointed window to match, the simple building looking as if it had grown there among the spire-like fir trees.
There is another cemetery on this island, though, where no headstones mark the graves and beside which is no church. The old Indian burial ground dating back to dear knows when. Growing on all the graves, in the tangled jungle where they lie, are lady's-slippers, dainty, and precious.
We spread out picnic lunch, make campfire coffee on the shining graveled Bloor's beach, the surf rattling in and out over the pebbles, making weird rhythmic music. I could spend the rest of my life on such a beach and be continually, urgently happy. See you tomorrow. June."
Above text: June Burn. Puget Soundings. May 1930.