Rain is threatening to move in so let's remember the sun-filled days of the summer of all summers in 2013. These colorful shots are from "Visitor's Day," Camp Nor'wester, Johns Island, WA.
The beautiful photos below are thanks to Sally, Michael, and Hailey Poutiatine, two generations of camp crew, who marked the day and shared with us. 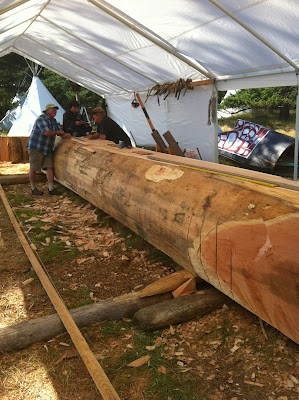 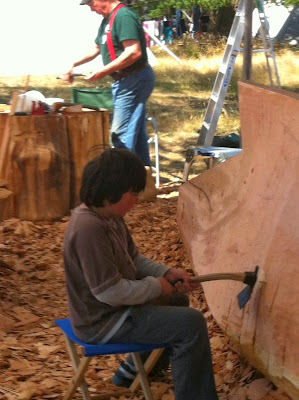 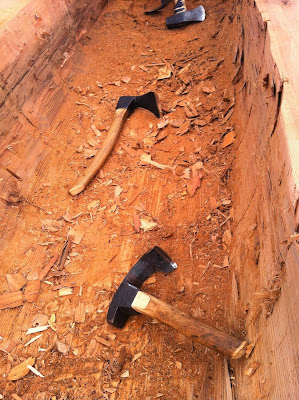 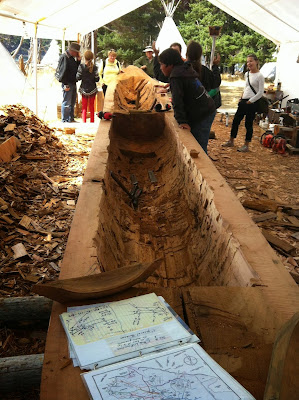 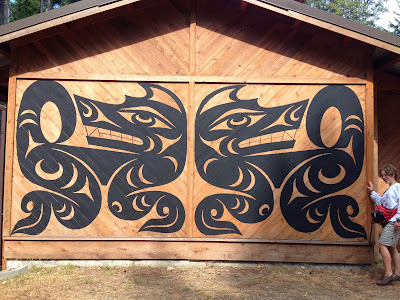 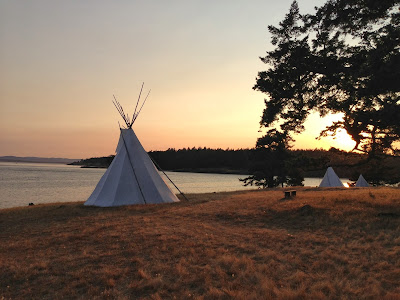 Posted by Saltwater People Historical Society at Thursday, October 31, 2013 No comments: Links to this post

NOAA’s Office of Coast Survey, which creates and maintains the nation’s suite of over a thousand nautical charts of U.S. coastal waters, today announced major changes ahead for mariners and others who use nautical charts. Starting April 13, the federal government will no longer print traditional lithographic (paper) nautical charts, but will continue to provide other forms of nautical charts, including print on demand charts and versions for electronic charting systems.
Since 1862, those lithographic nautical charts -- available in marine shops and other stores -- have been printed by the U.S. government and sold to the public by commercial vendors. The decision to stop production is based on several factors, including the declining demand for lithographic charts, the increasing use of digital and electronic charts, and federal budget realities.
“With the end of traditional paper charts, our primary concern continues to be making sure that boaters, fishing vessels, and commercial mariners have access to the most accurate, up-to-date nautical chart in a format that works well for them,” said Capt. Shep Smith, chief of Coast Survey’s Marine Chart Division. “Fortunately, advancements in computing and mobile technologies give us many more options than was possible years ago.”
To read further please click here

Posted by Saltwater People Historical Society at Tuesday, October 29, 2013 No comments: Links to this post

The following are photos shared by the crew of the Danish spidsgatter PIA who sailed from Olympia, to the islands for the Deer Harbor Festival. Afterwards, the fleet rested up in Watmough Bay, en route to the Port Townsend Wooden Boat Festival, in the sunny, memorable, summer of 2013. Thanks Aho´i! 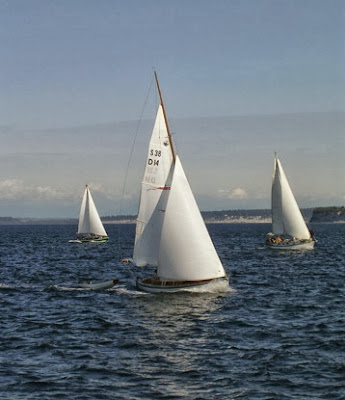 "An almost forgotten relic of pioneering on San Juan Island is the sole surviving pot kiln left from the beginning of the lime industry. It is on the property of Mrs. Delilah Houde on Westcott Bay, [San Juan Island, WA.]
The land where the kiln stands was homesteaded by the twin Scurr brothers, Robert and Richard. The former arrived at Roche Harbor in 1871, and the latter, two years later.
Mrs. Houde lives in the Scurr's house, which has a fireplace quaintly reminiscent of those the brothers had been accustomed to in their native London.
Near the house is another building, which Mrs. Houde understands was a quarry men's mess hall. Behind it against a hill is the pot kiln, topped with a small shed.
The base of the kiln is brick, with one opening. Above the bricks is the rough stone pot, the whole structure being about 12-feet in height. One may peer down into it through an opening in the shed floor.
Pot kilns were smaller and older than the tower-type stone kilns also found in the San Juan Islands. Their use was begun in the early part of 1860, by both American and British subjects.
Somewhere in the vicinity of the Scurr property, British marines stationed on nearby Garrison Bay are said to have burned lime for use at the fort and to ship away.
The pot kiln process was a slow means of obtaining the finished product. It is said that the men from the garrison required two weeks to produce 50 barrels. It took them that long to lay, burn, and draw, a kiln.
Chunks of broken limestone were piled in from above, leaving a small space at the bottom, where the fire box was opposite the opening. As the mass of rock heated slowly, the smoke and carbonic-acid gas escaped through the top.
When the calcining process was complete, the fire was allowed to go out and the brittle, flaky, white lime was removed through the opening with the help of long-handled shovels.
Island records to date give no indication of the exact age of the Scurr kiln. It may date almost back to 1882, the year the brothers began mining the great ledge of limestone lying across the neck of the peninsula between Roche Harbor and Westcott Bay, or it may have been built a few years later, when they patented a second piece of property.
The tract where the kiln stands was purchased by Mr. and Mrs. F. W. R. Dally of the Orcas Lime Co  about 1921. Mrs. Houde acquired a portion of it from the Dally's 23 years ago, after they ceased quarrying."
This column was published by The Seattle Times, October 1960.
Above text written by author/historian/journalist Lucile Saunders McDonald (1898-1992). Her 23 cu. ft of research papers (1941-1990) are archived in the Special Collections, Suzzallo Library, University of Washington, Seattle.
McDonald's literary rights have been transferred to the University of WA but her collection is open for all to study.


Posted by Saltwater People Historical Society at Thursday, October 10, 2013 No comments: Links to this post

❖ CHRISTENING OF A SHIP ❖

"Birth of a ship is not just the laying of the keel but the christening ceremony before a vessel first becomes waterborne. Many have seen ships christened just prior to launching but few have ever bothered to ask why bottles are used as part of the ceremony.

In days of yore, it was considered a sign of a long and successful life for a ship by the throwing of a silver cup over the side on launching day. However, it is to the British we must turn for the custom of the present christening of ships, for it was Britain's King William III who considered the silver cup a bit wasteful and who instituted the custom of smashing bottles across the bow instead.
And it was the suave Prince Regent, who later became King George IV of England, who added one step to King William's bottle christening by choosing a lady to perform the ceremony, mostly because it amused his many girlfriends and created excitement among them. The idea caught on, though the throwing of the bottle caused a bit of a hazard with the spraying of broken glass.
At a later christening, an English lady, high on the social register nearly decapitated a spectator with a bottle when she missed the bow of the ship she was sponsoring; ever after the custom demanded that the receptacle is tied and swung against the ship's bow.
Due to the fact that champagne has always been a toasting wine, almost from its inception, this beverage has been used to christen ships. But there have been exceptions. For instance, many missionary ships have been launched with milk, soft drinks, and water.
Christenings have been filled with many amusing incidents. At a West coast shipyard in recent years the christening party arrived at the platform to prepare for the ceremony only to find that the ship had accidentally launched herself a few hours earlier and was sitting in the water. The entire program had to be changed and the christening took place at a later time at dockside.
Frequently at launchings, women will take mighty swings and miss or may hit the desired target and find that the bottle refuses to break. The containers are usually wrapped with colored ribbon or cloth of some kind to prevent the glass from flying, but this does not prevent the bubbly champagne from sometimes spraying everybody in sight.
Writer Raymond Lamont Brown tells of a Miss May Gould of Boston, Mass. who had a bottle-missing experience. When it refused to break and when the ship went down the ways the lady bravely leaped into the water fully-clothed. Doggedly she pursued the vessel and succeeded in accomplishing the task while waterborne.
So, if the reader is ever privileged to attend a launching of a vessel, don't underestimate the power of a woman. You're liable to hear most anything emanate from her lips should she miss with the bottle, but most are plucky enough to get the job done in one way or another.
As has been told, launching ceremonies go back into antiquity when the heathens often slew women and tacked their heads to the ship's prow as an offering to appease the sea gods. Their blood was sprinkled over the ship's bows or on the makeshift ways.
The world has come a long way since such intolerable practices were used, but even in our day there is always a fair amount of apprehension at each launching ceremony before a vessel slides down the ways for her baptism in water."
Above text from:

The Unusual Side of the Sea, by Jim Gibbs, Jr.,
Book search here

Before William Gilbert was old enough to walk, he was accustomed to traveling around Lake Washington, strapped in his high chair aboard the VASTEN, passenger-freight boat operated by his father, Charles Gilbert, between Seattle and Mercer Island.
On the occasion of this launching of a pile driver, it may be only a floating machine to some people but can be a work of art to the man who owns one.
This new pile driver, designed for the Gilbert Pile Driving C., by William Garden & Associates and built at Robert Albin's Maritime Shipyards, has a whirly crane for waterside construction work.
The pile driver measures 62-ft x 24-ft and can carry 2,400 gallons of fuel for the Diesel engine. The 20-ton crane has a 70-ft boom.
After its launching at the Maritime Shipyards, the crane was towed today to the Blanchard Boat Co. yard for outfitting.
Ernest Zwiefelhofer, who has worked on the Seattle waterfront for years, will be foreman of the new pile driver."
Above text from The Seattle Times, 1957

Posted by Saltwater People Historical Society at Wednesday, October 02, 2013 No comments: Links to this post