"Captain Norman L. Driggs was born at Seattle 14 May 1886. He was the son of Granville B. and Fanny Lake Driggs.
For many years his grandfather, T. W. LAKE, owned and operated a shipyard at Ballard, WA., and Norman's play days were divided between this shipyard and the shores of the San Juan Islands where he developed a lasting love for ships of the sea.
At the tender age of sixteen, the lad shipped on the schooner NELLIE JENSEN. Later he tried working ashore in a concrete works, but, Norman said, he 'almost starved to death' and the work was not at all to his liking. So he shipped again, this time on the tug MESSENGER, doing a deck watch for a while, then standing watch in the engine room.
At this time Norman had an opportunity to enter college so he left the sea for a few long homesick watches, graduating from Pullman about 1907.
It was the happiest day of his life when he arrived back on the saltchuck again.
To start with he purchased a half interest in the CONCORDIA and established the first round trip schedule from the Islands––Friday Harbor, Lopez, Decatur, and Anacortes.
Later he built the CITY OF ANACORTES at Decatur and put her on the Roche Harbor, Waldron, Friday Harbor, Lopez and Anacortes route. Times were good and the rock quarry at Waldron Island was running full swing, shipping the rock to Grays Harbor to build the breakwater and jetty. And when things began to slow down, Norman bought the boats, equipment, and floating machine shop at Bremerton and started a ferry business between Bremerton and the Washington Veterans Home at Annapolis (Retsil.) He sold out later and went into the general towing business with the CONCORDIA and CITY OF ANACORTES, also chartered the FREDDIE, SKIDDOO, BUFFALO, VAGABOND, TAKU, and RAKU II. A year or so he started the Inter-Island Navigation Co, using the BAINBRIDGE, CITY OF ANACORTES, YANKEE-DOODLE, and GEORGIA.
Norman carried the mail through the San Juan Islands for 8 years and encouraged the idea of the Anacortes-Sidney Ferry with Capt. Harry Crosby. He did not follow up the operation due to other interests, but Crosby did.

It was at this time that Capt. Driggs chartered the CARLISLE II and started the Gooseberry-Orcas ferry run, and a year later sold out and built the 87-ft SPEEDER. Signed as mate on a shipping board boat during WW II; before she sailed the armistice was signed and the war was over.
So Norman set out to work on everything afloat and didn't miss it very far at that. Among his commands of the last two decades are ROSARIO, COLUMBIA, SEA KING, TYEE, IROQUOIS, INTREPID, WALOLA, MOHAWK, MARVIN, BARNEY JR., and many others. 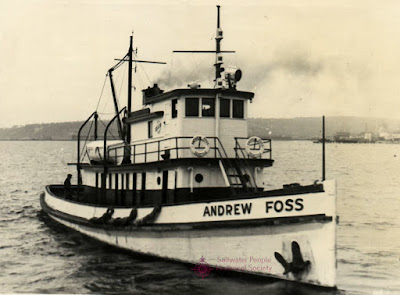 Next came the tugs MARTHA FOSS, ANDREW FOSS, PATRICIA FOSS, and ANNA FOSS –– and when you make out the KATHERINE FOSS in the offing, rest assured it will be Captain Norman L. Driggs at the wheel, with that cheery smile which has won him a million friends and almost that many boats."
Above text from the Marine Digest, Jan. 1944.
Posted by Saltwater People Historical Society at Wednesday, June 20, 2018 No comments:


"Fishing being an ancient industry, it is only natural that certain fishing grounds should have become famous. One of them is Bristol Bay, AK.
These waters form the southeastern corner of the Bering Sea and include the area from Cape Newenham to Cape Menshikoff. Of the six salmon rivers in this territory, five are open for commercial fishing: The Nushagak, the Naknek, the Egegik, and the Ugashik rivers. The sixth river, the Togiak, is fished for 'personal use' only, by the inhabitants of that watershed.

Bristol Bay’s claim to fame rests upon the very solid foundation that from the beginning of commercial fishing in America, it has been the largest producer of red—or sockeye—salmon in the world. Yearly catch has reached into the millions of salmon and the yield to the canners of millions of dollars in one year. Some wonder then that the name “Bristol Bay” has a magic sound in a fisherman’s ear and is spoken with wonder and respect when fishermen get together.

The gillnet is the only legal fishing gear in Bristol Bay. It may be used as a drift net, or as a set net—also called “stake net” or “beach net.” Set nets may be used by the local people only, and one must be a resident for a certain time period to operate this in any of the rivers. From the beginning of commercial fishing in Bristol Bay and for some 60-odd years thereafter the fishing was done with open boats, using sails and oars as propulsion, the use of motorboats having been prohibited by law.
The reasons for this prohibition were not quite clear, it seemed. Some said that it was for the sake of conservation, as powerboats would be so much more efficient than the sailboats. Others again insisted that motor boats were prohibited at the request of the canning companies, as motors cost big money, and had to be repaired and replaced when worn, whereas Squarehead, Finn, and Italian fishermen could be thrown away when worn out, and replaced at no extra cost. Whatever the reason the law was there and had to be obeyed.
The law prohibiting powerboats was changed finally, and the fishing season of 1951 brought the first power fishing boats to the Bay. They began to take over the field completely and the old sailboat is seen no more on the rivers of Bristol Bay.

The history of early Bristol Bay fishing is a proud and terrible record of grueling work, privations, sufferings; of heroism and skullduggery, of foresight and initiative. Bristol Bay boasts what is perhaps the most “un-navigable navigable” waters in North America, with dangerous sandbars and banks extending miles out to open sea. The tidal difference is the third largest in the world, creating dry land where, only five hours earlier, there was a navigable channel with twenty feet of water. The currents are unusually strong and erratic—storms are frequent and violent. Such are the waters fished by small, open sailboats—a testing ground that served to divide the 'men from the boys.'
The rivers of Bristol Bay took their toll, year after year; boats were capsized, sunk, stuck on a sandbar and broken to pieces by the tide when a sudden storm came up. No statistics have been compiled but is common knowledge that hundreds of fishermen found their grave in the sands of wide river mouths.


In the early transportation to and from the Bristol, fishing grounds was by sailing ships, each canning company operating its own fleet of vessels. The trip from “stateside” —Astoria, Seattle, San Francisco, and other ports—often had unpleasant surprises in store for the fishermen—who, during the voyage, also served as sailors. The Gulf of Alaska is known as rather a rough piece of water, especially in the time of winter and early spring, and the sailing vessels had to take a lashing from wind and waves before reaching the Pass—Unimak Pass, the gateway from the Pacific Ocean to the Bering Sea. And then the sailor might find—drifting ice in the Bering.
Days and weeks might go by fighting the way to the anchorage at the mouth of the river. A 40-day voyage from stateside to Bristol Bay was far from uncommon and it often happened that as many as 63 days were spent underway.
The working requirements? Here are excerpts from ‘Articles of Agreements and Wage Scale for the season of 1907 between the various AK Salmon Packers and Fishermen’s Union.’
‘...They agree to give their whole time and energy to the business and interests to said Company, and to work day and night (Sundays and holidays, not excepted), according to the lawful orders of the Captain, Superintendent, or whoever may be in charge for the Company, and for the compensation provided, but shall not be required to work for outside parties.’
‘...While preparing for fishing or after fishing has closed, the men shall not be required to work on Sundays as a rule, and if they are required to work any time on Sundays, such time shall be given to them during the week. In case of an emergency such as safety of ship or company’s property is in danger, such work to be done at any and all times without giving time back.

A cosmopolitan bunch they were, the Bristol fishermen. Italians, Finns, Norwegians, Swedes, constituted the main force, with a sprinkling of Danes, Irishmen, Scots, Germans, Hollanders—men of many races, creeds, and color of hair.

Peaceful and easy going, as a rule, disagreements were slow to arise, tempers to flare. Such things did happen —there were black eyes or bloody noses now and again. By and large, peace and good fellowship were the rules of the fishing camps.
The actual canning work was done by the ‘China gang’, under the command of the ‘China Boss.’ In due time the Iron Chink replaced the Chinese cannery worker. Later still the Filipinos were replaced by natives from the area adjacent to Bristol Bay, Aleuts, and Aleut-Eskimos.”
Above text from Fish and Ships, This was Fishing from the Columbia to Bristol Bay. Ralph Andrews and A.K.Larssen. Bonanza Books.
Posted by Saltwater People Historical Society at Saturday, June 09, 2018 1 comment:

❖ COMING THROUGH THE PASS ❖ 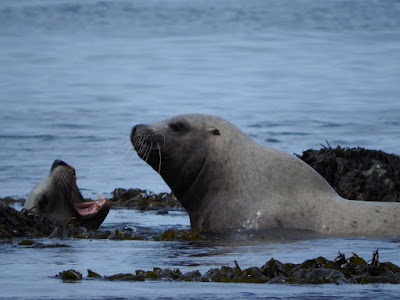 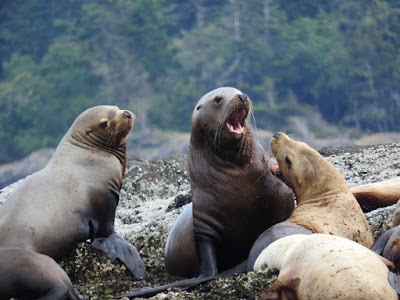 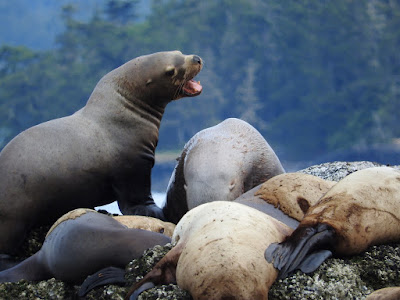 It's breeding season and the California sea lions are beginning to appear in the northern Sound.
The males who grow up to 8' and c. 800 pounds and the females typically reaching 5' and 250 pounds––are quite a load for the docks in Pt. Townsend where they have been observed hauling themselves out. One was flashing a  brand 'X101' indicating it is from a colony on the Columbia River.
The sea lions in these beautiful photos were cavorting in Cattle Pass, San Juan Archipelago, WA and shared by boater Lance Douglas of Blakely Island. Thanks for these shots, Lance.
For more news on these mammals, Jeannie McMacken reported today in the Peninsula Daily News.