Sailors Kirsten Thomsen and Kim Mathisen of Danmark spent parts of several sailing seasons in the Pacific Northwest in recent years. They would overwinter SOL in Pt. Townsend, Poulsbo, Deer Harbor, or Alaska, and fly home for the winter. They made friendships here in the Northwest and in Alaska, as they did all over the world.
Just in case you'd like to read about their passage through the Northwest Passage, here is their account:


Sailing Vessel SOL across the top of the World 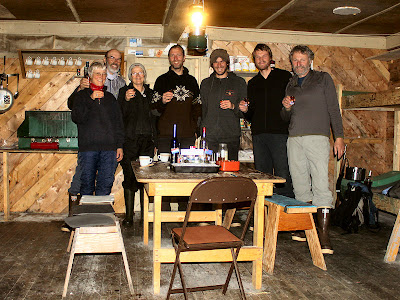 SOL has been hauled out at Nuuk Shipyard for the winter, while her crew is recharging at home in Denmark, preparing for 2013 return sail to home waters.
Text by sailors Kirsten Thomsen and Kim Mathiesen,
Denmark.
To Saltwater People Historical Society
October 2012.

S.V. SOL arrived home to Denmark in September 2013 and is safely in, Esbjerg, after 10 years and 3 months of voyaging.
The last voyage home from Nuuk, the capital of Greenland, started in June. SOL had been on the hard at Nuuk Shipyard for the winter. We returned to Greenland early May, and found her in good shape, despite 8” of snow, and deep frost. The main hatch was frozen shut, so it took a while to get into the boat. It took a couple of days to get cozy cabin temperatures, with the stove running max output!
During the next weeks we applied a couple of coats of antifouling, in the few sunny spells, and other necessary jobs, to prepare for launching.
Nuuk’s largest mobile crane lifted her gently into her right element, on a calm, sunny day. The whole operation took no more than an hour, including stepping the mast. How wonderful it was, feeling the movements of the sea again, sailing from the yard to the Nuuk dock!
Preparations for the coming voyage took a few weeks. But the Greenland spring was exceptionally cold and windy, so we didn’t feel any rush in heading out! A local friend talked us into giving a lecture at the National Library, on our NW Passage transit. It was a great success; we donated the proceedings to a shelter for children on the east coast of Greenland.
When we finally left, we had a leisurely cruise down the Greenland west coast, stopping in many beautiful anchorages.  The ice was not a problem yet––some of the glaciers spewed huge amounts of ice out of the fjords. But in general we mainly saw solitary huge bergs floating on the currents. 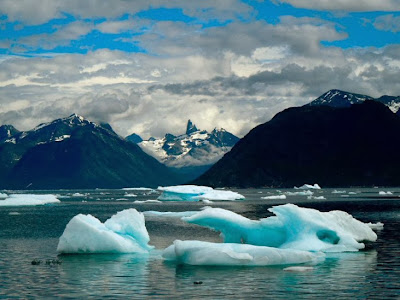 For us it was very interesting to explore the old ruins and read the old sagas. We did a lot of trekking, and climbed a few small mountains for fantastic views over the ice spattered fiords and magnificent landscapes. This area is where the Vikings settled, more than 1000 years ago. It is well described how they farmed the green, fertile valleys in the sheltered fjords. At the same time Inuit settled Greenland from the north, slowly moving southwards. These Viking settlements lasted about 500 years––hereafter they disappeared without trace. Only the ruins of their farms and churches remain, scattered in the landscape.
We spent time in Qaqortoq, the largest of the southern Greenland towns, and Nanortalik, the southernmost town. Lovely little places, with friendly people and all the necessary services. In Greenland there are no harbour fees, but the facilities are not really built for yachts.
By the end of July we were a whole group of yachts, mainly from Scandinavia, just waiting for the ice to break up. Nanortalik harbour is well sheltered from most wind directions, except southeast. There were still heaps of ice outside the harbour entrance, which is normally not a problem. But when an early morning southeasterly gale awoke us, it meant a very speedy evacuation of the dock. The ice was moving very fast into the harbour, rapidly filling, and almost blocking the entrance, by the time we got underway. A 54-ft. Dutch yacht needed a towline to get her off the dock, and we both just made it out, before everything closed down; the pleasures of cruising!!
Finally the ice had broken up sufficiently, for us to depart. By now it was already late July, so we decided to abandon our plans for a cruise around Iceland. The trip through the channels and sounds to Prins Christians Sund was breathtaking: enormous vertical mountain walls rise directly from the surface of the sea to more than 3000 feet. And everywhere magnificent ice bergs floated around, in contrast to all the grey granite. We had to zigzag between the ice chunks, but had an easy transit, anchoring for the night at the eastern entrance to the Sound.
On July 30th we left Greenland in beautiful sunshine, very light winds, and only a few scattered icebergs to dodge. Motoring into Stornoway as the sun rose was a beautiful finale of the 1200-mile trip from Greenland. Here another of our circles was closed, as we last visited Stornoway in 2003, outward bound, after having spent the summer cruising Spitzbergen and Iceland.
In Stornoway we had a happy reunion with our friends on TOKIMATA, the New Zealand boat that we sailed with, through the NW passage. They came from Iceland––what a fantastic coincidence, to meet again here in Scotland!
We stayed in Stornoway for an entire week, enjoying the lush vegetation with tall trees for a change. We toured the island of Lewis, and saw many of the historical sites, such as old rings of “standing stones”.
Stromness, Orkney Islands was next, where we also spent time, touring the islands, experiencing their historical heritage, rather similar to the Hebrides’. Scotland and its many Isles are a magnificent cruising ground; we’ll just have to come back again sometime!
A good weather forecast and 36 hours of great sailing across the North Sea, took us to Norway, and old cruising friends. Our last visit with them was 10 years ago, outward bound for Spitzbergen. So we had a great reunion, which lasted several days! The weather allowed for T-shirts and shorts––the first time, after spending the last summers in the Arctic.
Heading south, we revisited well known anchorages, enjoying warm weather and fresh sailing breezes. From an anchorage near Norways southernmost point Lindesnes, we crossed Skagerrak to the fishing port of Hanstholm and on to Thyborøn by the western entrance to the Limfjord next day––hereby making the final full circle on SOL’s long voyage. Thyborøn was our last Danish port, when we set out on our adventure back in 2003. SOL has left around 60,000 miles in her wake, and her crew has fulfilled most of their dreams. Although the “Admiral” could name quite a few places that we missed! Kim is going back to work full time in the near future, and there will be many changes to our life. SOL is going to have a major refit, spending the winter inside a boatshed by the port.
Looking back at our journey, the highlights have of course been nature and wildlife, but not least all the lovely friends we have made on our way. Everywhere in the world we have met wonderful, hospitable, helpful, and generous people, who have been a tremendous help and bonus for a couple of wayward sailors. We are very grateful––that part of cruising life we’ll miss a lot. We hope to be able to keep in touch with as many as possible for a possible reunion somehow, somewhere!
Thank you.
Kirsten & Kim
S. V. SOL
Danmark